Skillz "Be Alright" feat. Kornbread & Aaries from Okayplayer on Vimeo.


Skillz does. His new clip for "Be Alright," features the rapper enjoying family and friends on a warm day in Richmond, Va. As the kids are in their second week in school, it seems a little early to reminisce over the season and too late to celebrate it. But I guess Skillz thinks that'll "Be Alright" too.
Posted by Craig Belcher at Monday, September 15, 2008 No comments:

It's taken me awhile to appreciate the music of Q-Tip after his "Amplified" phase and the meandering jazz/rap stuff that leaked from two unreleased albums. I even found it hard to listen to his earlier work with A Tribe Called Quest after those musical missteps. But I'm digging this. Welcome home, Q-Tip.
Posted by Craig Belcher at Sunday, September 14, 2008 No comments:

"Til I got flashed by the paparazzi.. Damn, these n*ggas got me, I hate these n*ggas more than the Nazis.” - Kanye West.

There's never a good time to wild out in a airport, but if you had to pick a day, Sept. 11 would probably be the worst choice you could make. Yesterday, Kanye West and his bodyguard confronted a photographer who had taken his picture at LAX. In the video above, we see the bodyguard smash a photog's camera onto the floor while Kanye (grey hoodie) makes quick work of what looks like a flash. The bodyguard then runs up on the shooter who recorded the fracas on a video camera, but isn't able to wrest it from him, according to TMZ. The web site also claims that West was arrested after he was approached the same pap who videotaped the incident while a police officer stood beside him. The rapper's bodyguard was arrested as well and both were released on $20,000 bond yesterday afternoon.
Posted by Craig Belcher at Friday, September 12, 2008 No comments:

Thanks to the good people over at MOD for providing a home for the bits and pieces that have been trapped in my videocassettes for years. This clip reminds us why Kid N' Play got a movie deal and that they once a had a DJ named Wiz who wasn't Martin Lawrence.
Posted by Craig Belcher at Thursday, September 11, 2008 No comments:

Email ThisBlogThis!Share to TwitterShare to FacebookShare to Pinterest
Labels: Float On, Kid N' Play, The Floaters

The Source of Discourse 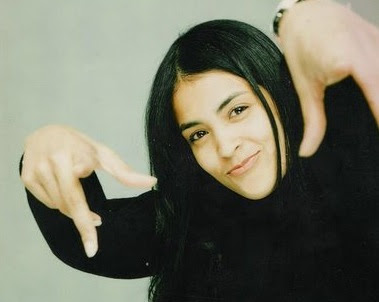 Former Source Editor-In-Chief Kim Osorio sued the ownerz of the magazine for sexual harassment in 2005, describing a workplace where "employees often watched pornographic movies and hung pictures of females in G-strings, smoked pot and called women bitches." Supposedly, this was the environment she worked in for five years, day in and day out, until she was fired. The jury found that she wasn't a victim of sexual harassment, but they did award her $7.5 million for unlawful termination.

While she waits for that payday, the former editor has been making good use of her time. She's the executive editor at BET Interactive and she's written a book about her time at the magazine once known as hip-hop's bible, "Straight From the Source," which came out yesterday. I haven't read more that the excerpts shared on the blogs, so its hard to tell if she's accepting responsibility for the mag's failure or painting herself as the helpless minion of morally bankrupt owners David Mays and Raymond Scott.

She admits to sleeping with rappers, which was one of the charges made by Scott in a interview where he was found to have defamed her character. The former editor explained her relationships with artists in a recent interview.

“I don’t think that I did anything wrong by dating people or being involved in relationships with people. For women it always comes down to the Scarlet Letter, sexual – oh my God, it doesn’t matter what year, what millennium we’re in; we are always looked at in that sort of light.”

It's been a long time since I finished journalism school, but I'm pretty sure they still have that rule about not sexing people you interview or write about. Once your drawers come off, your objectivity is already gone. Of course, things happen when adults work together closely over a period of time and that's when you make professional adjustments. NBC's Andrea Mitchell stopped covering financial matters once she started seeing her future husband Alan Greenspan. Reporter Maria Shiver was relieved of her duties at NBC once she became the First Lady of California. But Osorio doesn't seem to think there was anything wrong with her hook-ups with rap titans Nas and 50 Cent while she was editor of one of the top-selling music magazines.

That's the kind of attitude that led to the demise of hip hop journalism on ink and paper. If you want to read the truth about hip hop in 2008, blogs are the only source.

N.O.R.E. not only drops the f-bomb during this interview with former Wavelength host Ray, he also threatens fellow Queensbridge rapper Nas. If you can't recall the discouraging words that led to this lesser-known rap beef, listen to an emotional N.O.R.E. here and here.  A quick search of the internets suggest that N.O.R.E. ultimately chose to weaponize a flower pot as this feud climaxed in a nightclub.
Respect to the crew at MOD for the redesign. What y'all think?
Posted by Craig Belcher at Monday, September 08, 2008 No comments: