D'angelo back to the stage? 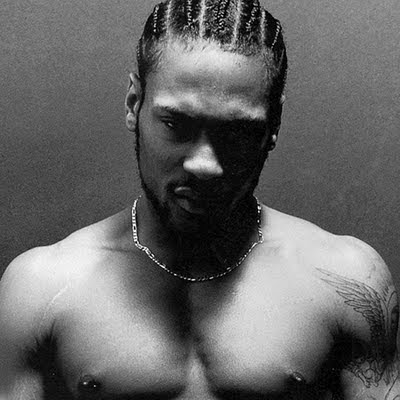 Micheal "D'angelo" Archer, the troubled R&B singer who hasn't released an album since the end of the Clinton administration, appears to have scheduled some concert dates. The native Virginia is set to perform at the Paradiso in Amsterdam on Jan. 30 and Jan. 31., according to the venue's web site.
As any fan of the man and his music knows, dates don't mean much to D'angelo, unless he's going to court. The release date for his third album has been pushed back so many times you can't see it without a telescope. But maybe this time it'll be different. We can only hope. But how long before we turn into this guy, waiting for that wonderful, magical mythical thing that never comes?
UPDATE: When asked if the alleged dates are valid, an official representative for D'Angelo said, "Nope."
Posted by Craig Belcher at Saturday, October 29, 2011 No comments: This week, Sony Pictures Classic's documentary on A Tribe Called Quest, "Beats, Rhymes and Life," comes to dvd shelves and Redbox this week. Which means it's a great time to second guess the choices of first-time director Micheal Rapport, now that we're over the joy and wonder of seeing someone treat at a hip-hop group with the same critical perspective reserved for rock bands. So, here are the top 7 things that I would've like to have seen in the movie and didn't thanks to the guy from Zebrahead.

1. Tommy Gun There was a rumor about Q-Tip and Mariah Carey back in the day. Supposedly, her husband Tommy Mattola, a record executive who allegedly knows some tough guys, got wind of this and was pissed. As the rumor goes, a contract was put out on 'Tip's life and he made himself scarce for a few months until things cooled down. I do know of a rapper who was waiting for the abstract rapper to executive produce his debut record around this time, but had to go on without him because he couldn't be found. Just so I know in case I'm on the run from the mob, where was he hiding?

2. Eye Patch Another rumor about Q-Tip, this one about an alleged altercation with Wrecks-N-Effect, a group as dated as their name sounds. Did one of their members nearly blind Q-Tip? Is that really why he wore a mask in the video for "Hot Sex"?

3. Mystery of Q We learned a lot about Phife in the film. We saw his house, his wife and his struggle with diabetes. But what about the group's leader? Q -Tip remains a mystery before and fafter the film.

4. After the Fire Selling part or all of your record collection can be an emotional experience. This guy talks about it on several of his podcasts. Imagine what it's like to have your collection, along with all of your belongings, destroyed by fire. Q-Tip knows, but he's not telling.

5. Who is Ali Shaheed Muhammad? He was almost an background artist in this film about a group he was in.

6. Beats, Rhymes and Life Rapport thought enough of this ATCQ album to name his film after it, but the film barely acknowleges its existence.

7. Rhymes & Fights Phife's brief solo career goes unmentioned, which is odd, since the director seemed driven to exploit the conflict in the band. Aside from the alleged shove in the film, Phife's video for Flawless is the only visual evidence of tribal discord.
Posted by Craig Belcher at Friday, October 21, 2011 No comments: