The full interview airs Wednesday on the Larry King Show on CNN.
Posted by Craig Belcher at Monday, August 31, 2009 No comments:


It's not easy to get a rap artist to expand beyond their stock answers and prepared comments. This guy finds a way, but at what cost?
Posted by Craig Belcher at Thursday, August 27, 2009 1 comment:


Back when indie rap lable Rawkus was flush with street cred and Fox, Inc. cash, I talked them into flying me to New York for the Soundbombing 2 release party/concert. They booked us on a small plane that left me and my partner DJ Reese shook ones. Our ride back would also be ... problematic.

DJ Reese was on the radio back then and had better connects than I did. While I could only swing airfare from the record company, he had a hotel room and some other perks. But when he said there would be a man with a card with his name on it waiting for us at the airport, I didn't believe him. Sure enough, when we got off the plane, we didn't see the man or the card. Resse made a call (I remember it was from a pay phone. Damn, this is an old story.) and within a few minutes a man with a card appeared and took us to a ... limousine.

Reese and I were like Arnold and Willis Jackson in that ride, rolling the windows up and down, taking pictures and (watch out 'deah now) talking on the car phone. Could it get any better than this?

More about this trip later. Above is some of the footage from the concert, featuring Sadat X and Common doing "1-9-9-9."[
Posted by Craig Belcher at Wednesday, August 19, 2009 2 comments: 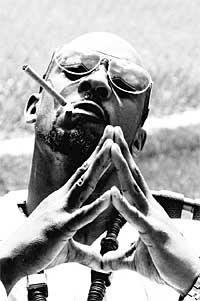 Detroit's hip hop community lost another pivotal member this weekend. Baatin, a founding member of Slum Village, died yesterday. The rapper, who had recently rejoined the group, was found dead on a Detroit street after leaving a cookout. The cause of death is unknown.

The 35-year-old rapper's death, follows the unfortunate demise of two other major players in the Detroit scene. Rapper Proof, of D12, was shot to death outside a Detroit nightclub in August of 2006. Former Slum Village member Jay Dila, also died in 2006, from cardiac arrest.